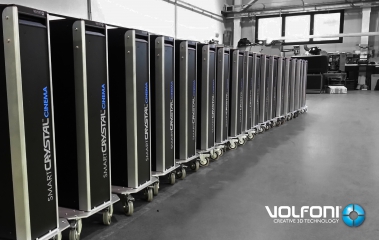 After just 15 months since its launch at CineAsia 2013, the SmartCrystal™ Diamond has been the number one selling Hi-Lef 3D system. With over 300 units shipped, this represents one installation every 36 hours somewhere on the planet. Backed by this success, Volfoni proudly announces today that it has opened a second factory for the production of the SmartCrystal™ Diamond in China. Volfoni repeats it successful roll out of production processes that have been developed by its R&D and Production team in Nice, France.

The new Volfoni-Factory will be located in Qingdao, the upcoming Hollywood of China. Together with its existing production facility in France and the integrated production partnership in Spain, the Volfoni production sites amount to 1 500 m2 of work floor and 40 specialized workers. The facilities are state of the art with clean rooms (dust free assembly zones). In peak-time, they allow for an output of 500 3D systems per month. Volfoni further sees the advantage of its global production network in the ability to balance the work-load between sites, and to achieve economies of scale that can ultimately be shared with the customers. On all aspects, Volfoni is definitively ready for the opportunity of the massive 3D rental contracts ending.

Volfoni is the global 3D technology solutions leader and creator of the award winning 3D cinema system, SmartCrystal™ Diamond. It is the inventor of the Surface Switching Technology and the compact Triple Beam Technology for Hi-LEF 3D Systems.