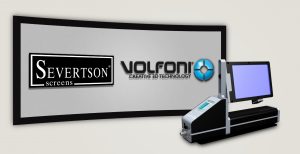 Volfoni and Severtson will be featuring 3D cinema quality for home cinema installations during InfoComm 2016, held from June 8-10 at the Las Vegas Convention Center, booth C6648 (Severtson). Both companies are recognized experts for their cinema equipment. Volfoni is a French 3D equipment specialist that revolutionized the 3D projection with its patented compact triple beam technology, doubling the light efficiency of passive 3D systems. Stevertson as a leading screen manufacturer has made its mark on the movie screen industry by inventing foldable 3D screens, tremendously easing transport and installation of screens.

During Infocom 2016, both companies join forces to present their finest declination of systems to provide home entertainment fans the best 3D solution and best screens for their installation. The dedicated model from Volfoni for this area is the SmartCrystal™ Pro Booster, that was launched this February. It is the most intelligent 3D systems with heat sensors and automation capabilities accessible via smartphone. From Stevertson’s side there will be various screens and framing solutions displayed.

In addition to their quality both companies enable better 3D entertainment through a wide range of additional products such as the SmartCrystal™ Diamond from Volfoni or active 3D glasses EDGE 1.2 that are the official 3D glasses for the Cannes’ Film Festival.

Mesa, Ariz.-based Severtson Screens, which celebrated its 25th anniversary in 2011, is an award-winning global leader in innovative and quality projection screens in the home theater, pro AV, and cinema markets. Its low rejection rate coupled with the high quality of all its products has made Severtson Corporation the industry standard for quality and customer service worldwide.

From its unlikely origins in the family kitchen to today’s three modern production facilities, Severtson Corporation has remained committed to the principles of innovation and uncompromising quality that have made them who they are today.